In the southern Plains, conditions will become ripe for severe weather, including possible tornado outbreaks. 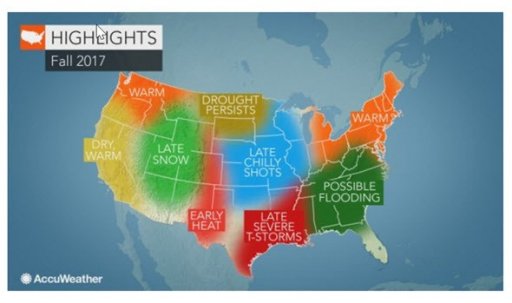 Warmth to linger into fall across the Northeast, mid-Atlantic
As children head back to school and swimming pools are closed down for autumn, warm air will linger across much of the Northeast and mid-Atlantic.

“That doesn’t mean it’s going to be exceptionally warm, but we do feel [temperatures are] going to run above normal,” AccuWeather Expert Long-Range Forecaster Paul Pastelok said.

However, rainfall will help to hold back extreme heat, letting balmy days kick off the fall season.

It’s too soon to tell how these factors may affect the vibrancy of the region’s foliage, but windstorms could prevent fall leaves from hanging around for too long, Pastelok said.

Late-season severe weather will threaten to kick in from Albany toward New York City and northern New Jersey.

Southeast to remain vulnerable to tropical hits
Though the Southeast had an easy start to the hurricane season in 2017, a few tropical hits may threaten to spoil the first half of fall.

“We think that the areas that are more vulnerable this year are still the Gulf Coast and along the Carolina coast,” Pastelok said.

In addition to tropical threats, frequent showers and thunderstorms could lead to flooding, including in areas which had drought last year, such as northern Alabama, Georgia and Tennessee.

Humidity will remain high across the region with few cooldowns predicted until late in the season.

“You may be mild for a period, and the next week you could be cooled down for a week. I think that’s the kind of flavor that we’re looking at in the fall coming up,” Pastelok said.
This year, however, forecasters are predicting a bit of early-season snow, arriving as soon as October.

“It’s always a tough call when you’re going to see that first snowfall in places like Chicago and Des Moines and St. Louis,” Pastelok said.

“Now, this fall may not be off that far from normal, but keep in mind it’s been very difficult to get cold weather in these places over the last several [fall seasons].”

A few bouts of winter weather are also in the offing during November, he said.

“If you get any of these mid- to late-season storms coming down in the northern Plains like we’re expecting, you’re going to get a clash of air masses [in the southern Plains],” Pastelok said.

This clash could cause to severe weather to erupt, with the threat for tornado outbreaks from Texas to Tennessee, he said.

Showers and thunderstorms may also lead to episodes of flooding in the lower valley of Texas.

Warmth, wildfires to linger across California; Storms to frequent Northwest
Rampant wildfires in the West will calm quickest in regions farther north, as storms stream in from the Pacific.

“Last year, they got slammed in late fall and winter in the Northwest as far as heavy rain and heavy snow go,” Pastelok said.”

A similar weather pattern this fall likely means the region will once again receive abundant precipitation – though not as much as during the fall of 2016.

According to Pastelok, water temperatures off the West coast are not as high as last year and, therefore, won’t foster very strong storms.

Rain and snow will at least total normal levels and have the potential to climb slightly above normal, forecasters predict.

From southwestern Montana down toward California, drier conditions and lingering warmth mean it may take most of fall for wildfires to calm down.