BELTSVILLE, MARYLAND, AUGUST 6, 2020–The first complete genome of the Asian giant hornet has been released by a team of Agricultural Research Service (ARS) scientists. ARS has made the genome available to the research community in AgDataCommons and the National Center for Biotechnology Information, even before publishing the results in a scientific journal to make the data freely accessible as quickly as possible. 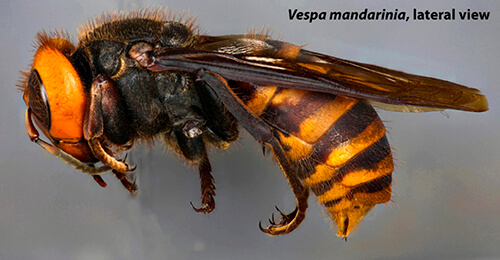 The goal is to produce the genome and make it available quickly after an invasive insect is detected so researchers will have this information immediately to help coordinate an effective response.

Asian giant hornets are the largest wasps in the world, ranging from 1.5 to 2 inches long. Their native range extends from northern India to East Asia. Now, they have been found in western Washington State as well as Vancouver Island and Langley, Canada.

Asian giant hornets concern beekeepers because they can attack honey bee colonies during the late summer and early fall.

The team of ARS entomologists and DNA sequence experts began the task in May in collaboration with the biotechnology company Pacific Biosciences. They were able to rapidly produce the entire genome sequence from the thorax of a single insect frozen from the colony found in the town of Nanaimo on Vancouver Island in September 2019.

Pacific Biosciences’ new technology platform Sequel II with HiFi or “High-Fidelity” fragments permitted more genetic information to be extracted more accurately from the single specimen, allowing the team to finish the genome in just two months. This is much faster than a genome is usually completed and from much less source material, demonstrating that genome sequencing can now be part of real-time response to invasive species.

Computational biologist Anna Childers, with the ARS Bee Research Laboratory in Beltsville, MD, who coordinates the Asian giant hornet genome team, explained it is important to establish the sequence of the current colony in North America. This will help determine if any new finds come from the original source or to potentially signal a separate introduction from their Asian homeland.

“Having this reference genome will help provide a broader biological picture of the Asian giant hornet. It also will help build an understanding of the dynamics of any Asian giant hornet populations in this country and how they may adapt as well as possibly provide information to sharpen the development of controls to prevent them from becoming established,” Childers said.

This work is part of the Ag100Pest Initiative, an ARS program to produce reference quality genome assemblies for the top 100 arthropod agricultural pests, including foreign pest species that are potential invasive threats to U.S. agriculture.

More rapid development of reference genomes in response to the appearance of potentially harmful invasive pests is a paradigm shift for invasive species management.

With advances that have been made in DNA sequencing and data preparation as part of the Ag100Pest Initiative, a faster response to new pest detections such as the Asian giant hornet has become possible, removing limits that existed before due to sample size, DNA quality, and complexity.