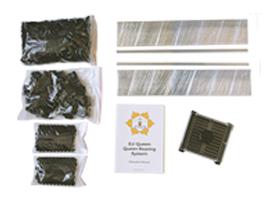 How to Start Queen Rearing

A strong and laying queen is one of the most essential components of a successful honey bee colony. She provides a constant source of new workers and directs the activities that keep the colony healthy and productive.

A colony may start raising a new queen because of a few reasons.

The queen may be aging or ill and produce fewer and/or lower quality eggs.

The queen may also leave to find a new home because the hive is overcrowded, and she may take more than half the hive with her (a process called swarming). This would require the bees who stay to raise a new queen.

The queen may also already be dead, which bees would quickly notice because the levels of her pheromones will rapidly drop in the hive. In this scenario, worker bees will select several young larvae and feed them exclusively royal jelly to create new queens.

Beekeepers have similar reasons for raising new queens. If they notice dropping levels of new brood in hives, they will replace the aging queen. To prevent swarming, they will split a large colony into two or more hives and supply the former hive with a new queen.

Introducing a new queen from the larva of a highly productive colony can also help to improve the output of a less productive colony. Within just a few weeks, workers from the new queen will replace the older population and the colony will exhibit the desired traits.

Before learning about queen rearing, we recommend reading about bee castes to understand how colonies work.

Like most beekeeping practices, queen rearing methods differ among beekeepers. The most common methods practiced today fall into two general categories. In the first method, an actively laying queen is separated from the main hive and provided with synthetic queen cups for her to lay eggs. In the second type, the beekeeper removes newly hatched larva from the brood comb to prepared queen cups, a technique known as grafting.

Both methods require a series of specialized hives for raising queens, which are very different from regular hives. The first hive is known as the starter hive, which is full of young nurse bees who care for the developing larva and exclusively feed them royal jelly.

The second hive, known as the finishing hive, is where nurse bees finish raising larvae and seal the queen cells. This allows the larvae to undergo the final stages of development to become new queen bees.

Finally, individual queen cells are moved into mating nucs before they emerge. Each nuc is supplied with a single queen cell, from which a new queen will emerge and begin taking mating flights.

The most important thing to remember is that this is all based on precise timing. For example, larvae are only suitable for grafting during the first few days after hatching. Near the end of the process, it is crucial to separate the sealed cells before the first new queen emerges, or she will destroy any other cells she finds.