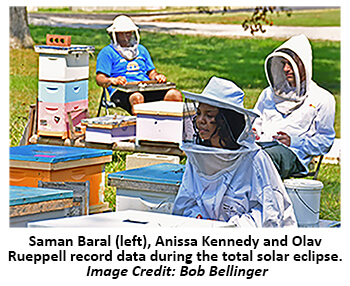 The lives of honey bees are intertwined with the sun. They are most active outside their hives during daylight hours when flowers tend to be unfurled and forager bees can load up on nectar and pollen. They also use the sun as a navigational reference point and can even communicate to hive mates where food is located in relation to the sun.

Tsuruda, Clemson Extension’s apiculture specialist, and Olav Rueppell, professor of biology at the University of North Carolina-Greensboro, were curious how honey bee activity might change during a total solar eclipse. Prior studies from Europe have shown that bees decrease their activity outside the hive during 85- to 95-percent solar eclipses. Tsuruda and Rueppell, animal behaviorists at heart, wanted to know whether bee colonies that harbored a food surplus and few developing bees that needed feeding might differ in their response to a 100 percent solar eclipse when compared to colonies whose honeycombs were comparatively bare of food but had many developing bees. 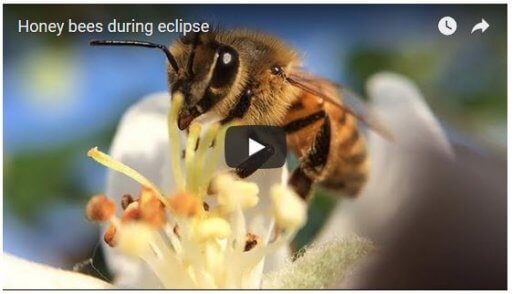 A while back, Rueppell contacted Tsuruda about collaborating on an eclipse project. Since Tsuruda maintains several hives at Clemson University, which was directly in the path of totality, and Rueppell has an eager team of researchers who were interested in this once-in-a-lifetime opportunity, it was a great matchup. The project would not have been possible without the members of Rueppell’s lab: Esmaeil Amiri, Saman Baral, Shilpi Bhatia, Anissa Kennedy, Kevin Le and Prashat Waika. Rueppell’s daughter, Anika, also helped monitor hives during the eclipse. 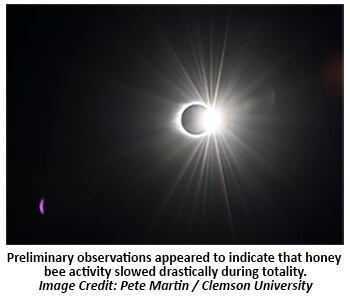 Each researcher was assigned to a pair of hives to monitor: one with low food needs and one with high food needs. The researchers monitored the hives for 30-minute time blocks. On the day of the eclipse, they monitored the hives before the eclipse, during the partial eclipse leading up to totality, during totality, in the post-totality partial eclipse and after the eclipse ended. Because bee foraging activity varies throughout the day, the observations are more meaningful when specific times of day will be compared across multiple days and not just pre- and post-eclipse.

Careful to point out that the data has not yet been processed, Tsuruda was still able to provide some anecdotal observations. She noticed that foraging activity at her bee colonies during the partial eclipse was similar to the day before. But during totality, when ambient light levels shifted suddenly to near-darkness, bee activity at her hives slowed drastically.

“It happened so suddenly, in the last minute before totality, the perceived light changed so visibly,” Tsuruda said. “I knew they would slow down, but once it got dark, not much happened. Maybe one bee returned and one bee left. Compared to pre-eclipse activity, when we were seeing 20-30 bees come or go in a 60-second period, it just seemed to shut down.” Light measurements were also taken to analyze correlations between changes in activity and light levels.

In a second experiment, the researchers wanted to test how bees might respond if they were removed from their hive and challenged with finding their way home during totality. One inspiration was a study on how ants responded to being removed from their nests during eclipse events. During a partial eclipse, ants placed some distance from their nest returned as usual. But during a full eclipse, they remained motionless in their new location and didn’t march homeward until the light returned.

Tsuruda and the UNCG team removed both worker bees and drones from a hive, moved them about 500 feet, dabbed them with fluorescent marker powder and released them. A team member stood ready at the hive with two clickers and a timer. “We wanted to see if there was a difference between a worker bee and a drone in terms of their readiness or ability to return to the hive,” Tsuruda said. Upon releasing them, some bees flew up and around while others stayed on the ground “because they were freaked out that they’d been put in a jar and sloshed with powder and released outside of their hive.” But soon afterward, the bees started to make their way home. During the full eclipse, some bees flew up into the air but then went down to the ground and did not attempt to fly – similar to the ants – until it got light again and they began to fly home.

Precisely why bees change their foraging during an eclipse and why they stay grounded during totality after being relocated isn’t known. Tsuruda said the answers to these questions could enhance our understanding about behavioral flexibility in honey bees and their ability to adapt to new and unique environments. Honey bees are the main managed pollinators in modern agriculture. They are moved in hive boxes to farmlands all across the United States, where they pollinate crops ranging from apples and almonds to cucumbers and blueberries. 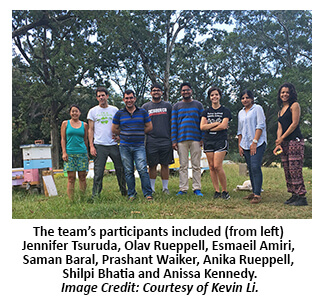 “Some people don’t even realize bees have brains,” Tsuruda said. “But they are actually these really complex, fascinating animals.”

She plans to work with Rueppell and his students to publish the findings at a future date.

But truth be told, bees are not the creatures that most fascinate Tsuruda during an eclipse.

“The animal that has the biggest change in activity in an eclipse is the human,” Tsuruda joked. “We all go outside and look up. We basically shut down for the day and don’t act as we normally would. How strange is that?”