Beekeepers Are Losing Apiaries to the Fire

As crews continue to battle the massive West Mims Fire, mainly dry weather will worsen the wildfire and drought situation across the Southeast into late May.

Severe to extreme drought conditions from southern Georgia through the Florida Peninsula has left the region a tinderbox since the beginning of the year.

The largest active fire in the region is the West Mims Fire burning in the Okefenokee National Wildlife Refuge near the Florida-Georgia border.

The blaze, which is only 12 percent contained, has grown exponentially to over 140,000 acres since being sparked by a lightning strike on April 6, according to InciWeb.

Mandatory evacuations were expanded on Tuesday to encompass the entire southern half of Charlton County, Georgia.

The fire-ravaged area could use several days of a soaking, steady rainfall to help chip away at the drought, contain ongoing blazes and completely alleviate the wildfire danger.

Unfortunately, only a few days of sporadic rainfall are anticipated across the Southeast into the end of the month.

Scorching, record-challenging heat in the middle to upper 90s F will build ahead of a storm early this weekend. 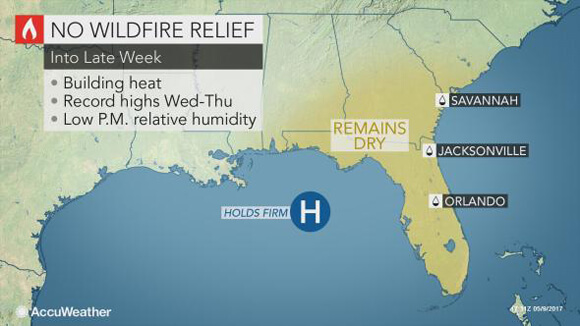 “There will be some showers and thunderstorms [from Friday night into Saturday], but not nearly enough rainfall to break the drought,” AccuWeather Meteorologist Maggie Samuhel said.

The showers and thunderstorms will be hit or miss in nature, with some areas completely missing out on the beneficial rainfall. Still, any wet weather and increase in humidity will help to temporarily moisten the parched ground and vegetation, and suppress ongoing wildfires and smoke in the area.