Varroa mites can quickly become a very serious problem for bees and bee keepers. To keep your colony safe from the effects of this parasite, be sure to perform periodic inspections. Using the EasyCheck system from Véto-pharma makes the process simple and provides an accurate assessment of the infestation in a hive.

What are Varroa Mites?

Varroa mites are external parasites of honey bees that feed on developing brood as well as full-grown adults. In the US, these mites were first detected in Florida in the mid 1980s but are now found nation-wide. In many cases, colonies infested with Varroa mites may produce malformed brood with missing wings or legs, and parasitized adult bees are often weak and short-lived. Left untreated, infestations quickly grow out of control and may kill entire colonies.

Adult Varroa mites have eight legs, are a reddish-brown color and have an oval body typically between 1 and 1.5 mm across. While they are large enough to be seen with the naked eye, their flat shape allows them to hide between the segments of the thorax or abdomen of honey bees.

Why Should I Check for Varroa Mites?

A colony infested with Varroa mites typically produces less honey and is susceptible to secondary infections. Checking for Varroa mites is an essential part of controlling this parasite and limiting the effects on your colonies. Using the Varroa EasyCheck makes it simple to check for mites, assess the level of infestation and determine the effectiveness of treatments.

Dadant & Sons Pro Tip: Don’t wait until you see the effects of an infestation to check for Varroa mites! Detecting mites early is the best way to keep them under control.

Primarily, mites are spread among colonies by drifting drones and workers. Occasionally, a honey bee may pick up Varroa mites when robbing smaller colonies. However, no matter how a colony becomes infected, when left untreated the mites quickly multiply within the hive.

How do I Check for Varroa Mites? 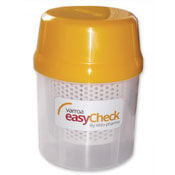 When inspecting your hives, we suggest wearing protective clothing and using a bee smoker to help keep the colony calm.

Dadant & Sons Pro Tip: Make sure the queen is not part of your sample! We suggest locating the queen so she may be isolated and protected during this process.

To see the EasyCheck in use, watch the video from Véto-pharma.

For more information on using the Varroa EasyCheck, consult the Véto-pharma Guide to Varroa mites. This in-depth publication covers the life-cycle of the Varroa mite, the best times to check your colonies and timing treatments to maximize their effectiveness.