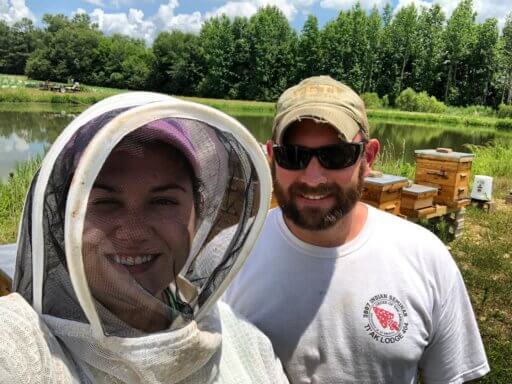 Justin and Colby Ruf are a husband and wife beekeeping duo located in Harvest, AL that run Hive of the Rising Sun Apiaries, LLC. They offer naturally raised, raw honey and pollination services to the Tennessee valley. Beekeepers of 5 years, they got their start in the beekeeping world when Justin saw an article on Facebook about the decline of honeybees and the struggles that beekeepers are facing. Concerned about this issue, Justin went down a google rabbit hole and started researching everything. He picked up his first beekeeping book, which was Kim Flottums “The Backyard Beekeeper”. After absorbing everything in The Backyard Beekeeper, Justin found Dr. Keith Delaplane with the University of Georgia, where he and Colby followed the curriculum of the Master Beekeeper Program. Later on, in 2016 they attended the North Alabama Beekeepers Symposium and absorbed as much as possible, both feet in from there on.

After the symposium, they started putting out feelers to see if someone could be their mentor and found a second-generation beekeeper that had been beekeeping for over 30 years. At the height of his career, he managed 75 hives at one time. As this mentor showed them the ropes of beginner beekeeping, Justin and Colby absorbed everything they could. As the years went on, their mentor became widowed and now lives by himself. When his health started to decline, he asked Justin and Colby to move his bee yard and completely take it over.

“However, we didn’t want to take away the one thing in his life that he was truly passionate about”, Colby said, “so we told him to keep his hives and we’ll come to him and manage it for him. Through this mentorship, we feel like we’ve almost become his 2nd set of grandkids. If he ever has an issue with something, he’ll us for help. We even have family meals together. I think it’s really indicative of what beekeeping really is at its roots. Like the bees, “it’s all about community and helping one another for the greater good and making sure they’re here for generations to come.” 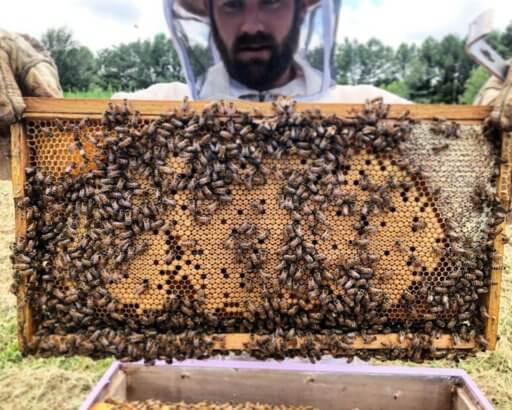 One of the areas of beekeeping Justin and Colby are both passionate about is drones. In their area of Alabama, beekeepers are taught that drones are irrelevant in all respects except mating with the queen. Justin and Colby have always struggled with this idea because they feel that drones have so much more importance within the colony. All the frames they use in their beekeeping are foundationless and they never regulate drone production. They closely follow Map My DCA and the research Julia Mahood has been doing on drones. Her research on drone congregation areas (DCAs) is something they feel is so important to the beekeeping community. As she mentions in a recent podcast episode, drones are actually known to sing to developing bees, however, more research is being done on this. As fairly new beeks, Justin and Colby are constantly reading up on the latest research and studies.

Justin and Colby feel that a challenging part of beekeeping is getting other and new beekeepers to work collectively. They feel that there seems to be a gap, at least in Alabama, between the collectivism of beekeepers. They feel that beekeepers should be working toward the common goal of educating everyone they come into contact with about the importance of bees. To them, it’s not just about selling honey, bees, queens, or even wax goods. It’s about taking every opportunity to educate everyone on where that honey comes from, how it’s made, and how much effort it takes on the bee’s behalf. It’s about teaching people what they can do to help build a healthy and flourishing ecosystem for the honey bees and pollinators everywhere. Working together, beekeepers have the ability to do so much.

The most rewarding part about beekeeping to them is when they’re working with a new beekeeper and they can’t help but grin ear to ear at the accomplishments they make throughout the year with their colony. “Also, when as a mentor”, Colby says, “you stand back as support and help guide the “newbee” with an issue and the light flips on and they’re so overjoyed with figuring out an issue and resolution. It’s like the training wheels have come off and you know as a teacher that they can take on any challenge.” 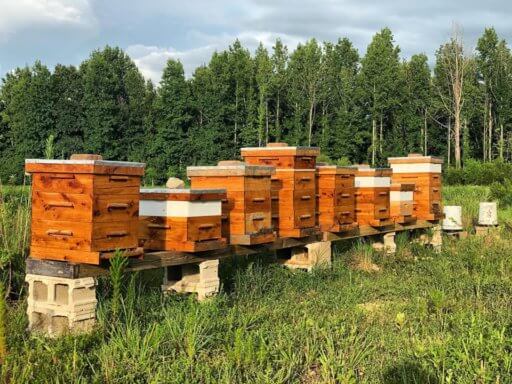 “We actually first met the Kentucky Dadant crew when we first got into beekeeping in 2017 at the state seminar”, says Colby.  “They were so hospitable and nice that we decided to stick with Dadant because they tell you the truth and don’t try to sell you stuff you don’t need. Their smokers are unparalleled.”

Justin and Colby feel that a big issue facing beekeepers today is the inability to work collectively. “We all have so much ability individually but could you imagine what we could do if we all focused on one common goal for the better and set every difference out of mind. Every difference”, says Colby. “Just like honey bees all working toward the common goal and welfare of the colony. People really are just as incredible as honey bees.” To fix this collectivism issue, Colby has become a coordinator and co-host of an annual honey fest and farmers market with the goal being to better connect beekeepers to the public to teach them about the importance of bees. “We want to enlighten the public and teach them ways they can help, such as planting a pollinator-friendly garden or giving them resources like the National Honey Board”, she says.“ Without proper education, bees won’t have long viable lives. We want beekeepers to get to know each other and socialize together and be more collectively involved so together, along with the public, we can build a better future.”

For more information on Hive of the Rising Sun Apiaries, check them out on Facebook or Instagram.