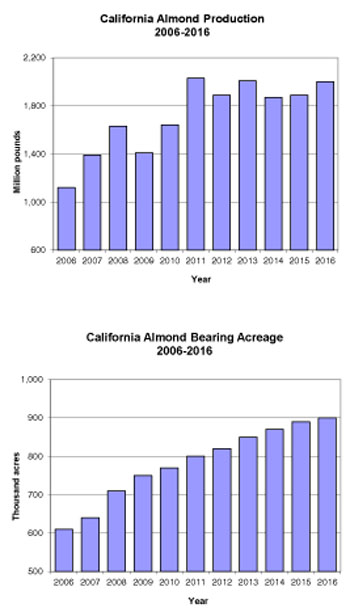 The initial subjective forecast for the 2016 California almond production is 2.0 billion pounds. Forecasted production is 5.8 percent above last year’s production of 1.89 billion pounds. Forecasted bearing acreage for 2016 is 900,000. Forecasted yield at 2,220 lbs/acre, is up  4.7  percent  from  the  2015  yield  of  2,120  lbs/acre. The  subjective  production  forecast  is  based on a telephone survey  conducted  from  April  14  to May 5 from a sample of almond growers. Acreage from these reports accounted for 27 percent of the total bearing acreage.

The California almond bloom began in mid-February, a slightly later start than last year. The 2016 bloom was short and fairly uniform, with overall good weather conditions. Some growers reported concerns about sufficient cross pollination.  After bloom, heavy winds accelerated nut drop.  There were reports of limb breakage in younger trees with heavy sets. This year, water seems to be less of a concern for growers than last year, although California is still in a drought.

PROCEDURES
Results of the subjective survey are based on opinions obtained from   growers. The   sample   of   growers changes  from  year  to  year  and  is  grouped  by  size  of operation, so all growers will be represented.  Growers are asked to indicate their almond yield per acre from last year and expected yield for the current year.

ACKNOWLEDGMENTS
A  special  thanks  goes  to  the  many  almond  farm operators  and  owners  who  provided  information  on their  operations. We appreciate the time  they  spent completing telephone interviews. 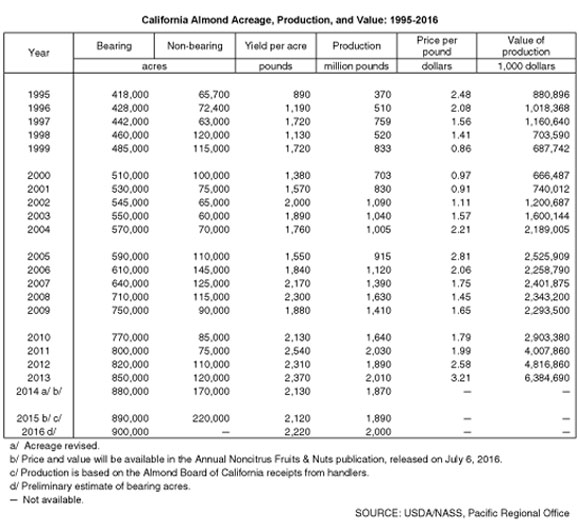