Despite unusual weather and pollination challenges, a USDA grower survey estimates a 2019 crop of 2.5 Billion pounds of almonds — a new record, and a 9.6 percent increase over 2018 production. 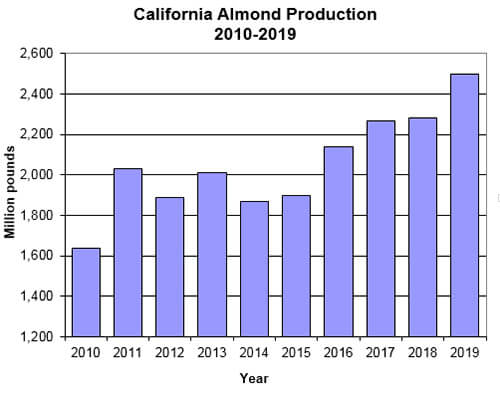 The 2019 almond crop experienced unusual weather in the early part of the season. Significant rainfall during the bloom hindered pollination. However, an extended bloom period provided the opportunity to compensate for disruptions and allowed for more overlap between blooming varieties.   Instances of rain continued into spring, bringing cooler temperatures that minimized pest and disease pressure, but there were reported occurrences of bacterial blast and jacket rot in some parts of the state.  Strong winds in mid-April damaged trees and knocked off some nuts.  As temperatures began to rise in the second part of April, orchards dried out enough to allow field work to begin.  With the crop developing at a good pace, irrigation and fertilization are in full swing.  Growers are optimistic as nuts appear to be sizing well.

The full report can be seen at https://www.nass.usda.gov/Statistics_by_State/California/Publications/Specialty_and_Other_Releases/Almond/Forecast/201905almpd.pdf