As the Vice President of the Colorado State Beekeepers Association and founder of the 4 Corners Beekeepers Association, you could say Tina Sebestyen knows a thing or two about honey bees. Tina got started in beekeeping because her great uncle was a beekeeper and her father mentioned that he would be interested in beekeeping as well. Overhearing this conversation, Tina created a top bar hive for him for Christmas and the bees to go with it. Shortly after, she found someone to mentor her and her father. She completely fell in love with the practice, though her dad did not seem to have the same passion as her.

“But being in that bee yard for the first time with my mentor, that was when I knew I couldn’t live without them,” Tina says. 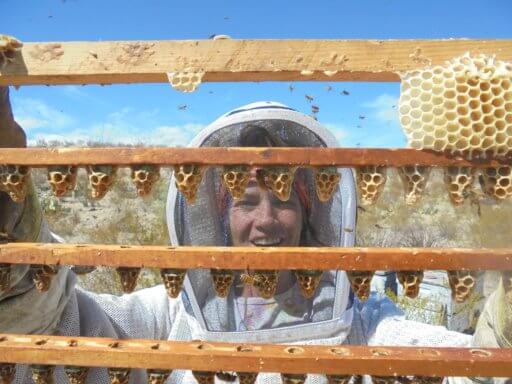 Undeterred, she continued beekeeping. As it happens, beekeeping is in Sebestyen’s blood. She can trace beekeeping in her family back through four generations in Lithuania. She said that men in her family just loved the bees and the honey. When Tina’s great grandfather moved to the United States, he continued pursuing beekeeping. He went out to the river and found a wild colony of bees, cut down the tree, and brought it home. Tina remarked that beekeeping was more adventurous in those days, as you couldn’t order packaged bees.

When she first started out, Tina soon realized what many beginners have to learn. That is, you don’t get bees in the spring: you order them in the winter. She began looking for bees in April and soon realized that she couldn’t find bees anywhere because it was too late in the season. She started calling every beekeeper she could find and eventually found Bill Loomis. Through Bill, she was able to purchase a swarm he was able to pick up and they went out beekeeping together. Soon after her mentoring sessions with Bill, Tina’s father received a diagnosis for cancer. This tragedy led to a momentous change in her beekeeping career, as Tina’s father’s dying wish was to have a Langstroth hive. Bill Loomis helped find one and bring it over, and after Tina set it up she transitioned to Langstroth beekeeping.

After her father passed away, she began to think about what beekeeping meant to her and how valuable her mentoring relationship with Bill was. Not everyone had someone to help them along, answer their questions, and call whenever they were having trouble. This was where she realized that she wanted to fill that role for others and start a bee club, where she could get together with a few people and talk about bees. She decided to put an ad in the paper and put some flyers up, and when she had her first meeting seven people showed up. Her second meeting hosted 15 people, and the bee club only grew from there. 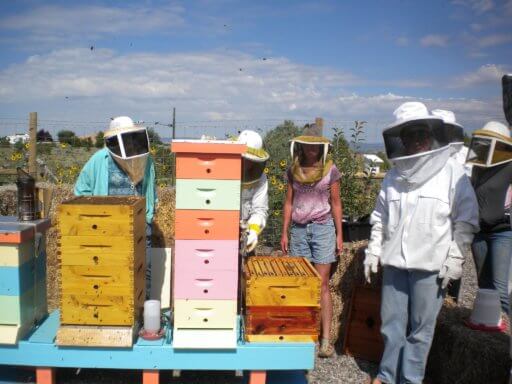 But with those few years of experience, she had a leg up from the people that were coming to the bee club. Many people saw her as their local authority and started calling her with questions. For any questions that Tina felt she couldn’t answer properly, she would call her mentor for advice.

“It was through this process that I just learned so many more things so much faster than I ever would have and was able to get great advice instead of just bumbling around in the dark,” she said. She picked up concepts quickly and worked hard to learn all she could about bees. For the last 14 years, she’s almost exclusively read bee-oriented material. Overall, Tina felt that running the bee club was a fast track to her beekeeping career progress. 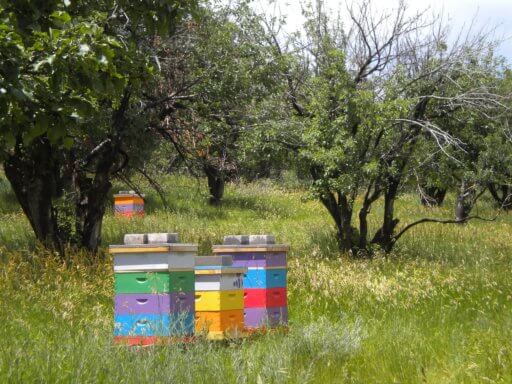 “Raising queens is pretty intense for the colonies because you’re taking a lot of resources from them,” she says. Because the bees are so focused on creating new queen cells, that means they don’t put as much effort into creating new drones and workers bees which results in fewer colonies. However, she also described queen rearing as amazingly fun, remarking on how generous other beekeepers are when it comes to sharing their knowledge. “There’s nothing like seeing that queen pop out of that cell for the first time,” she says. Part of the reason Tina decided to raise queens was that there’s an industry shortage of well-bred queen bees right now.

Although the beekeeping learning curve is steep, Tina once again emphasized, “our fellow beekeepers are so generous with their time, it’s just fantastic that we help each other learn”.  Through Tina’s bee club, the Four Corners Beekeeping Association, she sponsors a speaker every year for her spring seminar. She typically invites beekeeping icons like Tom Seeley, Ross Conrad, and Megan Milbrath to stay in her home, and she credited her experiences with them as giving her the confidence to write for the American Bee Journal and Bee Culture. Additionally, Tina is planning on writing her very own beekeeping book, which she describes as being a dream come true. Although Tina has been beekeeping for 14 years, she still very much feels like a beginner.

The best advice she has for any beginner beekeeper is to get involved in their local bee club. Her involvement with the Colorado Beekeepers Association began with Beth Conrey, who asked Tina to become her secretary. Tina gave a glowing account of Beth, saying that she built the Colorado State Beekeepers Association from 19 members to the current strength of 1,200. Tina also noted that being president of a beekeeping association is extremely time-consuming, and admires the time and hard work Beth invested to build the association to what it is today. Tina will be stepping down from her vice presidency in November and is looking for an enthusiastic person to fill the President and Vice president roles. Tina stresses the importance of the association, stating “if the state associations and the regional clubs fall, the education of beekeepers will decline and then the health of our bees will decline”. 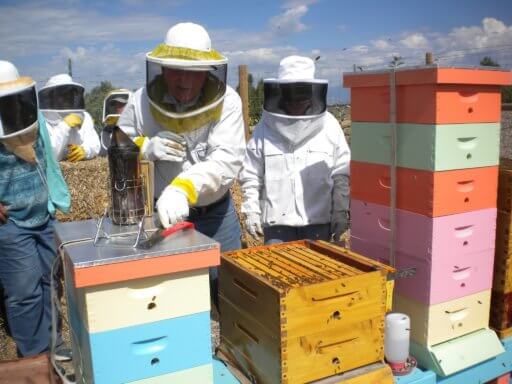 She stresses the importance of this, “Your bees aren’t just your bees because they wild mate and the queen will mate with up to 45 drones and she flies up to a mile and a half away. Whatever happens to your hive is communicated to all the hives in up to a 5-mile radius. So if you’re not a good beekeeper, you can actually take out the colonies around you like an A-bomb.”

It’s hard to overstate the importance of good beekeepers in supporting the bee population and the value of the pollination these bees perform. Diseases and parasites that afflict bees are highly contagious, and well-educated beekeepers are the principal line of defense protecting bee populations from outbreaks. In a time when bee populations are in decline, it’s more important than ever that beekeepers are well-equipped with the knowledge that Tina’s community shares.