This year marks 202 years since the birth of Charles Dadant, founding father of modern beekeeping and founder of Dadant & Sons Beekeeping Supplies. 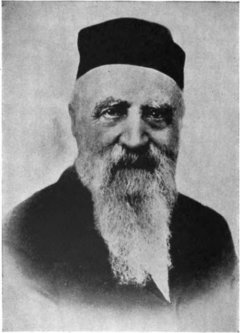 The second of seven children born to a doctor in the countryside of the Burgundy region of France, Charles developed a passion for beekeeping at the early age of 12 while helping a neighbor remove honey from straw skeps.

In 1863, Charles ventured across the Atlantic to America and settled along the banks of the Mississippi River on the edge of Hamilton, Illinois. However, the move proved to be fraught with difficulties. Charles didn’t speak English and it was the height of the Civil War. The 40-acre farm he purchased couldn’t support the famous Burgundy vines for wine and champagne. He was penniless.

Discouraged but adamant on providing for his family, Charles turned to his life-long hobby: beekeeping. His first few hives soon turned into 70 colonies, quickly making him the largest producer of extracted honey in America. Around 1870, Charles began to import queen bees from Italy, making several trips to their country of origin to better understand their behavior. The lessons he learned from importing queens would lay the groundwork for all future industry guidelines on importation.

Charles learned English by reading the New York Tribune daily, performing the translations himself with a French-to-English dictionary. After only six years in America, he became a regular contributor to the American Bee Journal, a publication Charles eventually purchased and one that operates out of the Dadant & Sons corporate office in Hamilton to this day. Many readers were surprised at his lack of fluency in English, considering his ability to write so well.

During this time, Charles experimented with a variety of different hive sizes and styles. Inspired by the writing of Moses Quinby and L.L. Langstroth, he adapted the movable-frame design to a larger box size, allowing for larger colonies. In 1878, Charles and his son Camille-Pierre (C.P.) began manufacturing comb foundation, at first for themselves and then later for sale to the public. This comb foundation is still produced by Dadant today at our corporate office and factory in Hamilton.

By 1885, Charles became a major contributor to numerous beekeeping journals throughout the world. Langstroth entrusted his book, “The Hive and the Honey Bee,” to the Dadant family and by 1899 the book saw four editions with Charles himself translating it to French.

In 1902, Charles passed at the age of 85. Since then, his love of bees and passion for beekeeping has been passed down from generation to generation in the Dadant family. His willingness to explore, research and document his experiences has helped this industry grow to what it is today.

Save on these Historic Beekeeping Publications

To celebrate Charles Dadant’s birthday, we’ve placed a number of historic works on sale. Originally published prior to 1940, each of these books contains amazing photography and in-depth information on beekeeping from years ago that still rings true today.

Dadant System of Beekeeping
First published in 1920, this book contains a wealth of practical beekeeping and historical information along with amazing historical photos.

Outapiaries and Their Management
Printed in 1919, this is one of the few books written on the subject of establishing and managing new bee yards. Still relevant today, its historical significance makes it a real collector’s item.

History of American Beekeeping
Printed in 1938, this is a fascinating and valuable historical document. This book details the rise of American beekeeping and the beekeeping pioneers who made it happen.