A beehive is a wonderfully complex machination – although at first glance it might seem like a chaotic, unorganized mess, there’s a lot more going on that might initially meet the eye.

What Is the Brood Nest and What Function Does It Serve?

We use the term “brood” in beekeeping parlance to reference the eggs, larvae, or pupae of honeybees – the future population of the beehive. The brood nest, therefore, is the area of the beehive where young bees develop.

Given this role, a functional brood nest is obviously essential for the survival of the colony. 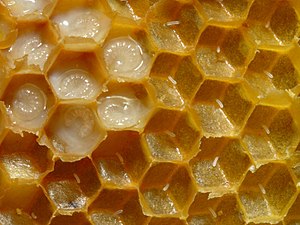 The queen bee, being the matriarch, lays her eggs in individual cells in the honeycomb, taking her time to carefully inspect each cell before dropping her eggs inside. Depending on available cell space and resources, she is capable of laying up to 2,000 honey bee eggs in a single day.

The eggs the queen lays will eventually become one of three types of bees:

Following her depositing of eggs in the center of the cells, worker bees come behind the queen to insert royal jelly, honey, and pollen (a protein source) for the larvae on the outer rim of the cells for them to feed on while they develop.

Here’s a high-definition video showing the queen laying her eggs overlaid by a helpful explainer of what’s going on:

Once the brood has passed through the initial egg and larvae stages (during which it appears as something akin to a grain of rice), it enters the pupa stage, when it begins to develop the visibly characteristic features of an adult honey bee – beginning with its eyes, legs, and wings, and finally sprouting small hairs before emerging from the womb into the world.

“Brood cells” are where, as the name suggests, the broods develop.

There are two types of developing brood cells: 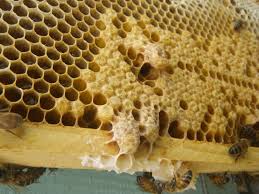 The brood nest cells (and surrounding cells) can serve any of the following functions: 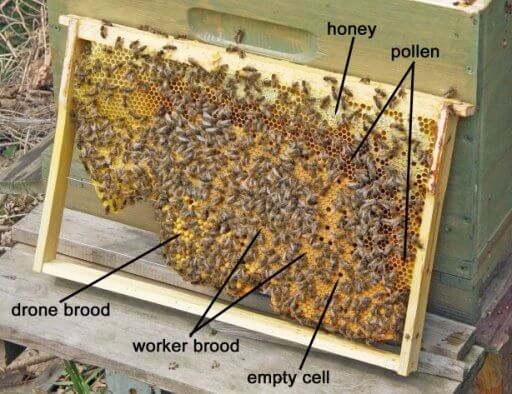 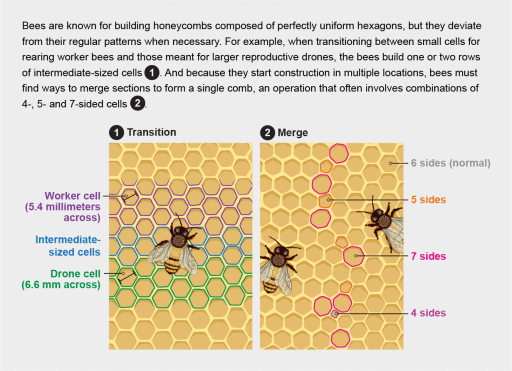 The Structure of the Brood Nest: What Is a Healthy Brood Pattern?

The brood nest is often described as having a “football” shape over multiple frames. Accordingly, the tallest portion of the brood nest, or the center point of football in the analogy, is usually in the middle frame, with each successive frame behind being shorter.

On any single frame, you will find a consistent pattern: brood nest in the middle, pollen storage sites to the outside of that, and finally stores of honey outside of those.

“Brood pattern” refers to the layout of the brood of different types of bees. When the queen is young and healthy, she lays out eggs in optimal patterns conducive to a thriving hive. As she gets older, the pattern tends to become more erratic until she is eventually replaced with a new queen.

The ideal brood pattern follows the structure we explored above, with the greatest concentration of brood among the interior frames toward the center of the brood and tapering outward in the “football” shape. This allows for easier feeding and care of the developing young bees.

What Is the Purpose of an Uncapped Cell?

Many beekeepers will find an uncapped cell in their brood nest and panic on the belief that this might indicate a failing queen or some other problem – but, in reality, uncapped cells in the brood nest are often totally normal and even desirable.

When winter approaches, bees will take care to store excess honey into empty brood cells. Bee experts call this “backfilling” the comb – the primary purpose of which is to create some insulation to keep the hive warm in the coming cold months.

How to Inspect Your Brood Nest

As the general of your beekeeping army, it’s your responsibility to inspect your brood nest to make sure it’s healthy and functional. Here’s a quick guide to help you do that without damaging the hive: 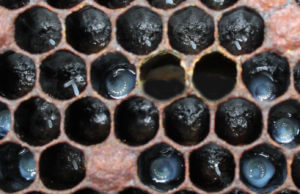 Get in Touch For All the Tools and Tips to Foster a Healthy, Thriving Brood Nest in Your Beehive

At Dadant & Sons, beekeeping runs in our veins; we’ve helped thousands of customers over the years who rely on our combined hundreds of years of beekeeping experience across multiple family generations.

If you’re looking for the top tools of the beekeeping trade, or if you’ve got additional questions about how to foster a thriving brood nest, don’t hesitate to contact us.