Hive beetles are an invasive nuisance for both bees and beekeepers alike. They can vary in size, though small beetles are more common in beekeeping. They can fly, and as a result, they relocate from one hive to the next with ease. They then spread to the entire apiary and your bees suffer as a consequence.

Integrating pest management to keep your bees safe is an important aspect of beekeeping. Dealing with hive beetles can be an annoying part of the job, but it’s nonetheless necessary.

Dadant & Sons know how much you care about your bees and your beekeeping lifestyle, so let’s learn about some of the best hive beetle traps to avoid an infestation. If you want to learn even more about these annoying pests, check out our Small Hive Beetle Book.

How do weak colonies respond to hive beetles?

Hive beetles hide in places of a beehive not easily located by honeybees. They’ve also been known to trick worker bees into giving them food. Large hive beetles can be stopped from entering the hive with entrances that are too small for them to access, but small hive beetles can get almost anywhere.

Most healthy honeybee colonies can keep their space clear of hive beetles, but weak colonies are often overwhelmed by the nuisances. Usually, this occurs in colonies that are young or have had a swarm in the past. In such an instance, the beekeeper must step in to assist the hive or the colony might collapse.

If the hive beetle population becomes too big, the problems come on suddenly. Hive beetle traps are the number one way to keep your beekeeping operation from suffering great losses.

What are hive beetle traps?

Hive beetles are, more often than not, found huddled in corners of a beehive or on your beehive frames. Hive beetle traps can be put in different sections of your beehive depending on where the cluster is.

Most of the traps use oil to destroy the hive beetle groups. In some traps, you’ll need to put the bait inside. Some of the smaller ones trap the beetles and kill them by starvation. Some traps are disposable, so the beekeeper can use them once to get rid of the infestation and then throw them away.

There are three main types of hive beetle traps:

We offer the hive stand beetle trap in two different sizes: 8-frame and 10-frame. The one you’ll choose depends on the size of your operation.

The 8-frame hive stand beetle trap is one of our favorites. It is made of cypress and is guaranteed to trap and kill small hive beetles. Also, you can check for mites using an included IPM board. It comes fully assembled, so you don’t have to worry about doing any extra work.

If your beekeeping operation is a little bigger, you’ll want to check out our 10-frame hive stand beetle trap. It can be used any time hive beetles are present. Since most of them are temperature sensitive, it’s better to use them during late spring or fall. Beetles are more likely to be out of the cluster and more active during this time. It comes with:

Regardless of the stand you choose, you’ll want to check and clean the traps every one to two weeks. Also, be sure to discard your oil in an approved, environmentally responsible manner! 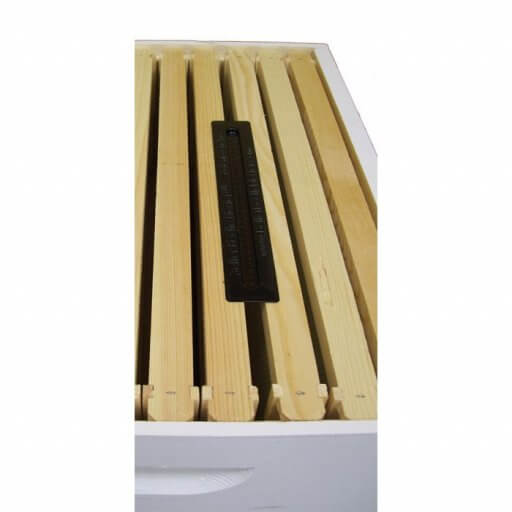 If you’re not into the bigger and more complicated beetle traps, we have smaller handheld options too. Laurence Cutts, a retired Florida State Apiary Inspector, invented these disposable devices because he wanted to make the process simpler for beekeepers.

There are similar one-time-use options out there, but these are by far the most cost-effective. Your options are the mini beetle blaster and the Cutts beetle blaster. Both are user-friendly for beginning and expert beekeepers.

All you have to do is fill it with a small amount of vegetable oil and place it between the top bar frames. Then, you wait for the beetles to come out. For severe infections, Dadant & Sons suggests using two per box.

We have two chemical-free hive beetle trap options for the environmentally friendly beekeeper. Our baitable beetle jail trap is reusable and comes with three trays. You can fill it with beetle bait, vegetable oil, or diatomaceous earth. The hinged lid makes it easy to clean and re-use for as long as the infestation is present.

You also might like Beetle Be Gone. These sheets are chemical-free and all-natural. They make trapping hive beetles simple. All you have to do is place one or two sheets where the beetles are hiding and wait for them to find it. Then, you reapply if they ever come back. It comes with 48 sheets, so you shouldn’t have to purchase it more than once in a while.

In addition to getting a beetle trap, there are other methods you can use to keep hive beetles under control. They have different levels of effectiveness, but they all allow the beekeeper to clear the hive and keep the beetles at a manageable level.

No matter what type of trap you choose, you’ll want to make sure your bees are happy by giving them some of the best bee feed supplies.

As always, please feel free to reach out to Dadant & Sons if you have any more questions about hive beetles, hive beetle traps, or anything else regarding the business of beekeeping.