When you think of bees, an image might pop into your head of the classic black-and-yellow striped carton-like bee as they are often depicted in popular culture and images. However, there are actually over 20,000 diverse species of bees in the world.

Over 4,000 of those bee species are native to the United States. Unfortunately, they don’t all work well in certain climates and conditions.

What to Know Before Buying Bees

Some beginning beekeepers think they can just go out and catch their bees before starting their colony, but it’s really not that simple. Bees caught in the wild are sometimes too feral to be good honey bees. They might also not be suitable to survive in your climate or region.

This is mostly because honey bees, just like all living and breathing things, vary in their characteristics depending on the species. They have different genetics responsible for attributes such as:

Even though the environment they’re placed in makes a huge difference based on stimuli and response, it’s genetic makeup that defines how a bee acts. It’s important to first know what your beekeeping goals are before jumping into it – whether it’s bee reproduction, resiliency, honey crop, pollination, or anything else.

Another important thing to know is the availability of certain bees in your region. You’ll want to order your bees before Spring because they might not arrive in time if not. Most bees come from the Southern states and when June comes the heat makes it too hot to ship bees.

Lastly, you’ll want to make sure your bees feel welcome in their new home. This can be as simple as setting up a cute sign for them and making sure their area fits their specific species’ needs.

The Main Breeds of Honey Bees

Most of the bees available for purchase can survive in a variety of regions if they are provided with the best supplies (like the ones here at Dadant & Sons), but you’ll still want to look into more details first. Six of the most popular honey bee breeds are:

Let’s learn a bit more about what we should know about these bees and their origins. 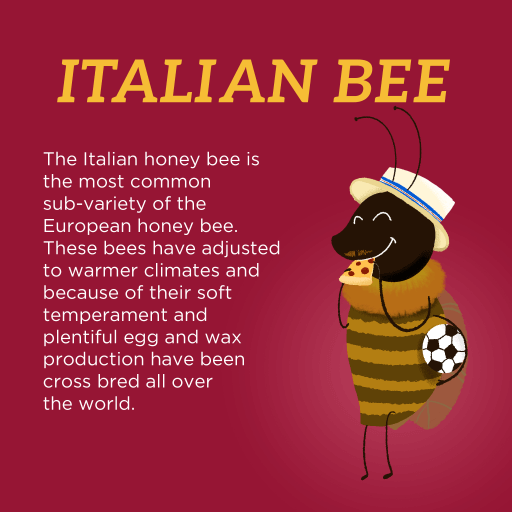 In our expert opinion, Italian bees are the top choice, mostly because they’re considered some of the calmest and most gentle of all honey bee breeds.

Italian bees have a very light color. At times, they even look purely yellow.

They’re well-liked because of their fertile production and brood cycle. Italian bees don’t often swarm. Most commercial beekeepers and honey producers use Italian bees as their number one source for production.

There are only a few drawbacks. First, they’ve been known to rob other neighboring hives in times of weakness. Also, because of their quick brood cycles, they consume resources very quickly.

Regardless, Italian bees are by far the best option, which is why they’re the kind we sell. They’re well-rounded and genial, which makes beekeeping easier. If you want to purchase our Italian bees, you can find them on our website here and here. 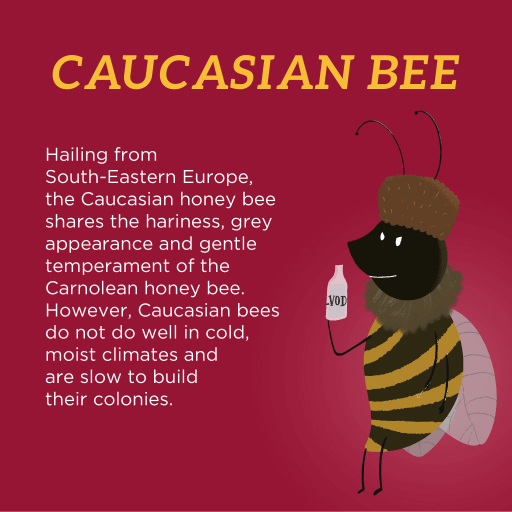 Caucasian bees are known for their very long tongues and their calm temperament. Caucasian bees can withstand a lot of annoyance before being irritated enough to sting.

While once extremely popular in the United States, their popularity has fallen due to lack of honey production. The productivity of the Caucasian bees falls far below that of the Italian bee and others. Regardless, some commercial pollinators still use this breed because of their long tongue, which helps pollinate certain crops like clover.

The Caucasian bees are also known for their organizational abilities; they store their honey in some of the most efficient ways. They also don’t move on to a new comb until the one they’re working on is completely filled.

The Carniolan bee is considered one of the top two bee breeds in the United States. They’re liked because of their dramatic spring build-up, which makes it easier for beekeepers who want to have an explosive build-up before summer.

Like the Italian and Caucasian bees, Carniolan bees are docile. They’ve unlikely to sting so beginning beekeepers and children can easily handle them. Unfortunately, they are more likely to swarm than any other subspecies of bees.

Their tongue is even longer than the Caucasian bee, measuring between 6.5 and 6.7 millimeters. This makes finding nutrition a lot easier. Caucasian bees don’t require that much food, either, so they can basically take care of themselves.

The Buckfast bee comes from Buckfast Abbey in the United Kingdom. In the early 1900s, their population was nearly destroyed by mites. One of the brothers in the Abbey is responsible for their resurgence; he cross-bred bees from the strongest colonies in the area.

After crossing the breeds, the Buckfast bee started to show resistance to things it hadn’t before like natural parasites. They’re also known for their skills at foraging and tendency to not swarm. They’re fairly difficult to locate within the United States, in part due to their popularity across seas.

The only downside is they tend to be fairly aggressive and often sting without warning. This makes it hard to deal with for beekeeping children and beginning beekeepers. If you can get past that, though, their stock can last for many years.

Russian bees first made their appearance in the United States in 1997. The USDA brought them here as a response to the increase of parasites that were leading to colony collapse in many regions. Russian bees were chosen due to their tolerance of varroa and mites. They often contain only half of the mite load that other standard breeds have.

Unfortunately, Russian bees rely heavily on their surrounding environment to rear brood, because they only do this during times of pollen flow and nectar. They also have some constraints on their breeding, which makes them difficult to obtain.

They also exhibit some bizarre behaviors in comparison with other breeds. They have a queen cell at all times and often show aggressive behavior towards both each other and their beekeeper. 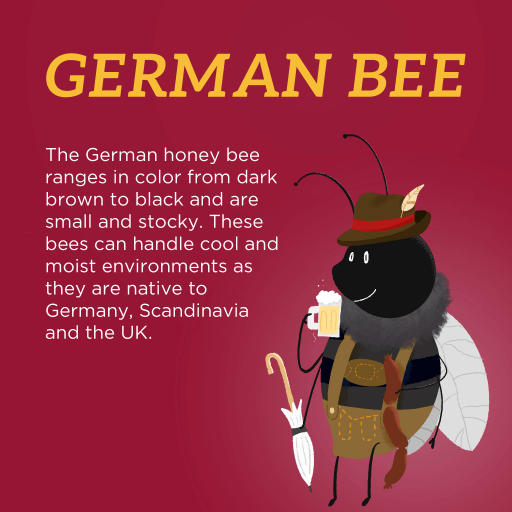 The last bee we will talk about is the German bee, which is sometimes called the European Dark Bee. It was brought to the United States from Northern Eurasia during the colonial era. Unlike many other breeds, they’re well-known for survivability in cold and long winters.

Unfortunately, they have a defensive and aggressive nature so it’s hard to work with them. They also have been known to brood diseases such as European and American foulbrood. Because of this, they’ve lost favor recently with beekeepers all across the world.

Now that you know a little bit more about the common honey bee breeds, you can decide which one(s) will work the best for you. Regardless of your decision, you’ll want to give them our top-notch honey bee feed supplies.

Don’t be afraid to reach out to Dadant & Sons with any comments, questions, or concerns about your busy business of beekeeping. We can’t wait to hear from you!