Wouldn’t it be nice to turn that weekend hobby into a full-time job? That’s exactly what Tommy Van Horn of St. Ambrose Apiaries managed to do.

He assured us it wasn’t an easy process. “At times it seems like a convoluted mess,” he said.

But the success of East Hill Honey and St. Ambrose Apiaries proves that starting your own beekeeping business is possible. East Hill Honey Company started as a backyard operation with two hives in 2011. Since then it has blossomed into a profitable business with 500 bee colonies and supplies wildflower honey to over 50 stores in the Pensacola, Florida region.

Dadant spoke with Tommy Van Horn on the phone for a conversation about going from amateur to pro, the importance of community, and the beauty of comb honey. 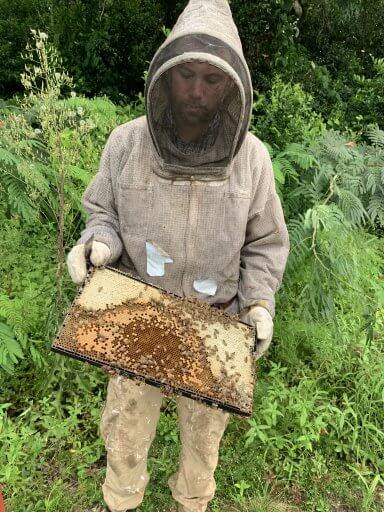 How East Hill Honey Got Started

Tommy told us he had a rather unlikely introduction to beekeeping. He was working as an executive at a nonprofit organization when a friend called and asked for his help.

“It was kind of a friend of a friend,” Tommy said. The friend had attempted to transport his bees by putting the hive in the back of his car. During the trip, the friend’s car was hit by a semi-truck. No one was injured, but the bees went everywhere. That’s when the friend asked Tommy to help rescue the colony. “I had like 20,000 bees crawling all over me,” he told us.

The experience sparked an interest. He decided to try his hand at beekeeping. “2011, we started with two hives and we produced a couple of hundred pounds of honey that first year. And we sold that honey in a matter of a week and a half and that kind of got my wheels turning at the time.”

Tommy tells us that gaining the support of his local community was a crucial step towards eventually becoming a self-reliant business. “My ability to market far exceeded my ability to produce the honey. So, we actually kind of created an informal cooperative with other local beekeepers. We had 5 to 10 beekeepers and anywhere from a hundred to 500 hives each.”

The collective would aggregate all of their honey and Tommy would use his marketing experience to move the product. “It was produced, marketed, and sold locally.”

The informal cooperative model was a success, and Tommy gained invaluable knowledge from the friends he made through the experience. But all the while Tommy was dreaming of something more. “The desire was always to kind of have a self-produced business and kind of become a commercial beekeeper.”

Tommy told us that the final steps before going solo were learning directly from commercial beekeepers and testing out marketing ideas at the local farmer’s market.

Tommy said that the farmer’s market “was kind of our launching platform. and we just trial and error of different products. It was just a great place to kind of see what stuck.”

Tommy’s experimentation at the market paid off. Soon East Hill Honey was able to afford a commercial kitchen.

“Commercial beekeeping gives you a totally different perspective,” he said. “You can’t sit and baby one hive for hours and hours, because it’s just not feasible to do that 5,000 times.”

Tommy said that the key thing he learned from his beekeeping mentors was that you can’t focus on just the bees. “I would say almost equally important is understanding the local environment, the schedule, and all the tools that we use.”

Tommy says that focus is critical to the success of the East Hill Honey Company. Instead of trying to create dozens of different products, he prefers to focus on perfecting just a few key offerings.

Their most popular product is their Florida Wildflower honey. But their tupelo honey has its diehard fans as well. “The Tupelo Honey is very popular. But it’s rarer and there’s not as much of it.”

But Tommy says his real passion is in producing raw comb honey.

“I feel like it gives honey the greatest dignity when you produce a beautiful sheet of comb honey. There’s a simplicity. The taste is maximized too. The honey is not being exposed to oxygen at all or any kind of blending through pumps and augers. You get this really unique taste of what nature has to offer.”

When we asked Tommy what he would like to see in the future of honey, his focus again returned to keeping things small and local. Since selling East Hill Honey to another family in Pensacola, Tommy has started up St. Ambrose Apiaries where he can focus his efforts entirely on the bees and enjoy the beekeeping way of life to its fullest (i.e. an off-season!).

Today, Tommy with help from his 7-year-old son, his dedicated and loving wife, and their three daughters manage 600 production colonies in NW Florida specializing in comb honey production and bulk extracted honey.

If you want to spend your money in a way that will keep the independent beekeeping community in Pensacola, Florida thriving, check out some of the wildflower honey products offered by the East Hill Honey.

The East Hill Honey Company’s commitment to keeping beekeeping sustainable for business owners, as well as the bees and the environment, makes them a brand you can trust.

If you’re looking for nucs in NW Florida, check out St. Ambrose Apiaries.