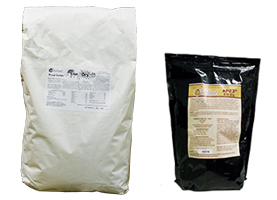 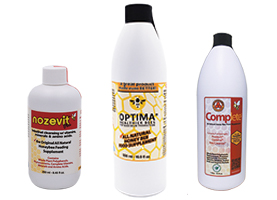 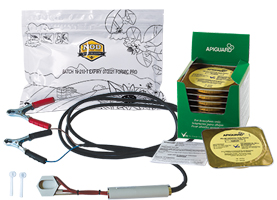 How to Maintain Hive Health

Bee care involves treating hives for diseases and providing supplemental feed. As a beekeeper, it is best to be prepared for different situations, such as infestations, diseases and low food availability.

When natural supplies are unavailable, bee feed is the perfect answer to the problem. Feed can be used during winter, when food storage is low, and even at the beginning of spring. The colony can get a head start on building the colony and making honey as they’re waiting for spring flowers to bloom.

Our AP23® Winter patties help to keep the honey bees alive when the winter is ending, a critical time of the year when honey bees often starve.

When the spring floral sources have not yet bloomed, Brood Builder and pollen substitutes get the honey bees going, and ready to visit the flowers when they bloom and have the nectar available.

Make sure to only feed them pollen when necessary because it may harm the health of your hive. Place them directly above the brood so the bees can use them effectively. Top feeders are available for both 8-frame and 10-frame hives.

Much like vitamins for people, honey bee supplements can provide nutrients to a hive. Supplements are predominantly used for beehives experiencing stress caused by the environment, such as too little or too much rain. Minimizing stress can help the colony remain healthy.

Honey-B Healthy can promote healthy vigorous hives when used as a feeding stimulant. Be wary of using it in the fall, because robbing is common during the season.

Varroa Mites: Varroa mites are the number one pest for colonies because they feed on developing broods and act as parasites to adult bees. Hives infested with Varroa mites tend to produce less honey and are more susceptible to secondary infections.

To prevent Varroa mites, take a look at our Varroa mite screen boards. You can also provide a treatment in fall to keep the infestation numbers low during the winter.

Hive Beetles: Larvae of small hive beetles do the most damage to hives because they eat their way through combs and feast on honey and pollen. This causes combs and caps to be destroyed, and their feces cause honey to ferment and discolor. Many beekeepers reported a smell of decaying oranges in hive beetle infested hives.

To treat a hive beetle infestation, try beetle traps. Try our West Beetle Trap Tray & Cover, which work by including pathways small enough for hive beetles to hide from bees, and end up in an oil trap.

Wax Moths: Although wax moths are commercially raised for lizards and birds, they are considered pests to beekeepers. They do not directly attack bees, but their behaviors are problematic to the health of the hive. They can damage comb and stored honey, which may lead to the death of bee larvae.

Wax moths and larvae are easily killed by freezing temperatures. If you live in a warmer climate or store bees in a warm facility, try para-dichlorobenzene products such as Para-Moth.

Bacterial diseases may afflict the health of your hive, and it may be challenging to diagnose them. It is important to familiarize yourself with these diseases, but Dadant & Sons highly recommends enlisting the help of a veterinarian before starting any treatment. Read more about diseases here.

American foulbrood, also known as AFB, is caused by a bacterium that infects young after they ingest food contaminated with the spores of Paenibacillus larvae. P. larvae can survive 40 years or more on beekeeping equipment and in contaminated honey.

Advanced cases of AFB will have an odor similar to rotting fish, which comes from dead and dying larvae. To catch it before this happens, visually inspect the brood for dead larvae.

European foulbrood, also known as EFB, is caused by a bacteria called M. plutonius, which can survive in bees and on equipment for several years. Larvae become infected when eating contaminated foo.

Inspect the larvae to determine if the hive is contaminated with EFB.

Keeping your hive healthy can be a challenge. If you can keep pest numbers low, you’ve already won half the battle. With routine checks, you can spot infestations, diseases and low food storage easily.